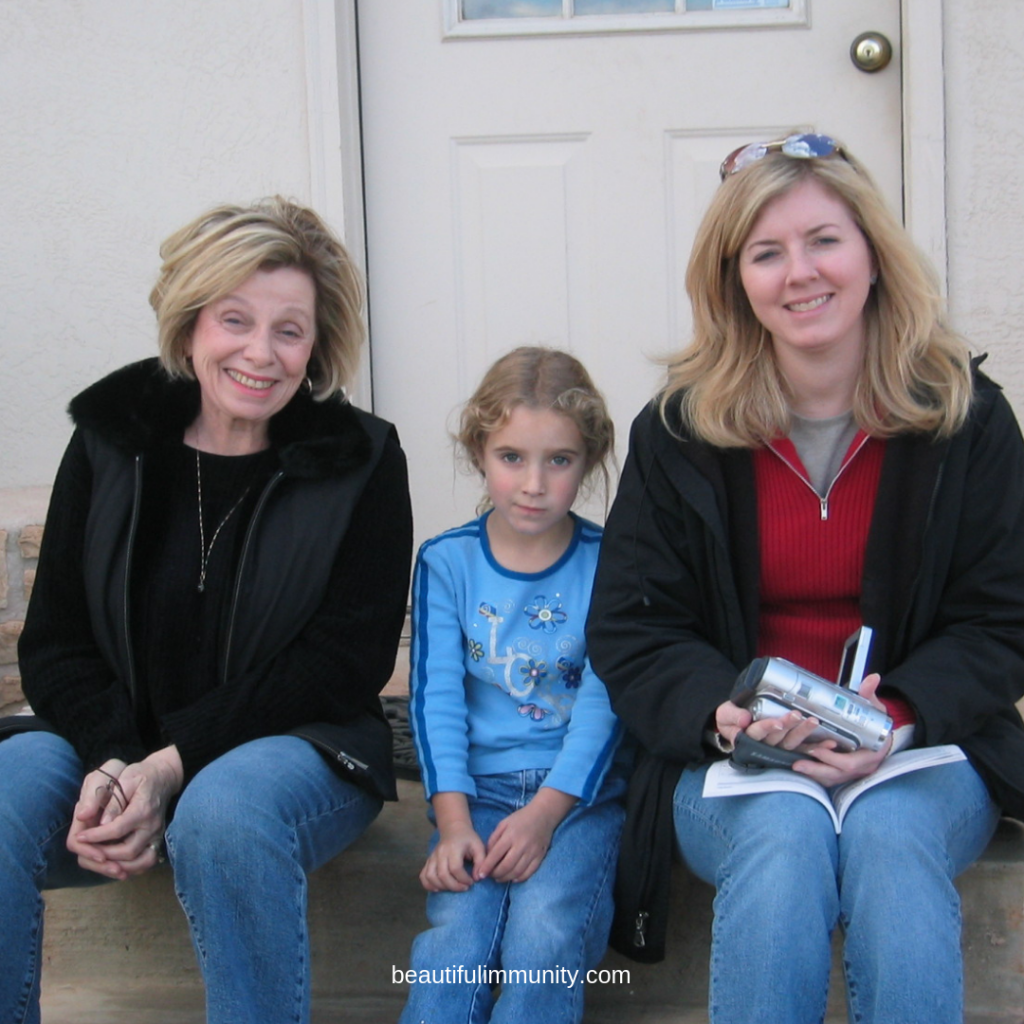 In the year 2000, my mother was diagnosed with a rare autoimmune disease that was causing inflammation all over her body and making her skin feel tight.  At first the doctors suspected Scleroderma, which was terrifying, because it causes hardening of your skin and eventually disfigurement and death.  Instead, they decided it was Eosinophilic Fasciitis, which is inflammation of the tissue surrounding the muscles.  They prescribed heavy duty steroids to suppress her immune system.  Those are the drugs you see advertised on TV, followed by a long list of side effects.

I was pregnant with my third child at the time.  I remember being so scared of not having her around.  They did some kind of treatment involving serum taken from a horse.  It is supposed to block the immuno-response.  She was in the hospital for about a week.  She began to do better and got back to a fairly normal life, while still taking the steroids.  She would try to taper off of them, but the tightness and swelling would come back.

In 2007, she was diagnosed with melanoma in her rectum.  I didn’t even know that was possible.  The doctors gave her about 2 months to live.  She found another doctor that said he could do surgery to remove the cancerous spot and they could do it in two weeks.

We had a family cruise scheduled for my parent’s 50th wedding anniversary that week.  My mom called my brothers and I to tell us that she would be staying for surgery and we should still take our families on the cruise.

I begged her to please go on the trip because it might be the last time we could all take a trip like that together.  I’m so happy she agreed, because we had a wonderful time and she only had to postpone surgery a couple of weeks.  The doctor said it wouldn’t make that much difference and my kids and I will treasure the memories from that trip for a lifetime.

The surgery was successful, and they were able to remove all of the cancer.  She was cancer-free for about 6 months.  Then the cancer came back with a spot on her lung.  From there it continued to spread and she had chemotherapy.  Eventually, she got a type of leukemia from the chemotherapy drugs (I can’t remember if it was AML or ALL).

She passed away from the leukemia.  All the while, I was scouring the internet for some alternate treatment.  She was too.  Farrah Fawcett, the actress, had the same exact type of cancer and tried an alternative treatment in Germany.  Farrah had been diagnosed before my mom and she passed away a few months before my mom.

I just felt in my gut that chemotherapy is not an effective treatment for this cancer.  It was killing off all of her good cells along with the cancer cells.  It was making her weaker and sicker.  How can a treatment that makes you sicker help heal?  Your immune system is meant to heal itself!  This is when my journey into natural health began.  I didn’t know the answer, but I knew chemotherapy was not the way!

Find out more about what I would encourage my mom to do now, if we had it to do all over again, in the next few posts of this series.

(p.s. Does my thyroid look enlarged in this photo?  I’m so glad that is under control now.)