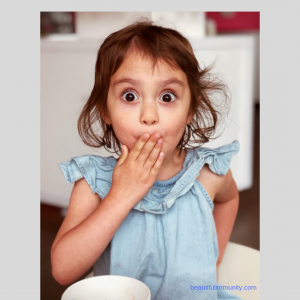 I’m a Certified Transformational Nutrition Coach, so I know a lot about nutrition.  I’ve studied healthy foods and which ones to eat for a healthy thyroid, what to eat for great digestion, and how to prevent inflammation.  I’ve learned so much over the last 7 years or so.

That’s why I was shocked by some of the foods that I had a reaction to on my latest elimination diet.  I started the diet because my youngest daughter had been having a lot of eczema and asthma symptoms this fall and winter.  I was convinced it was caused from eating dairy.  We took dairy out of her diet for a few weeks once before and she cleared up, but she and my husband love ice cream and they were not convinced.

I found a Youtube video where a girl got rid of her eczema using a diet plan called The Plan by Lyn-Genet Recitas.  Apparently this book has been out a while, but I had never seen it.  My friend said it was featured on Oprah.  I decided to try the diet with Katie and I would follow it with her to support her and I was curious about a few foods for myself.

What I really like about The Plan, is  that you take your basal body temperature daily and you weigh daily.  When you are having a reaction to a food, you can see it the next morning.  Your weight will go up a half pound or more.  There are three days of detox before you begin testing some of the most commonly reactive foods.

Katie and I followed the diet exactly on day 1.  She was not thrilled, but she was a trooper and didn’t complain much.  She was starving though, so she had half of a power bar that was not on the plan.  Luckily she lost weight, so she was not reactive to that bar.  I didn’t really want her to lose weight, but she lost about 4 pounds total.  I didn’t make her stay on the diet for the full 20 days.

Day 2 we cheated a lot.  We were both starving!  You’re supposed to have flax granola for breakfast every day, but she hated it and it killed my stomach.  I knew flax did not do well with my digestion, but you’re supposed to soak it and bake the whole seeds, so I was hopeful that it would be different this time.  It wasn’t.  We had a smoothie that I found from later in the plan.  I gave Katie orange slices, apple slices and a trail mix with almonds, pumpkin seeds and dried cranberries.  The apple, almonds, pumpkin seeds and cranberries.were on the plan, but not in one meal.  I also gave her organic popcorn with ghee.  That night, I made chicken and rice.  That was not supposed to be introduced yet, but, we were starving!

My weight went up a little over half a pound and I had headaches all day long.  My sinuses were so congested too.  I was miserable and wanted to go to bed.  Katie’s weight went down 1 pound. I wasn’t sure what could have made my weight go up, besides maybe the almonds.  So, day 3 I ate everything the same and eliminated the almonds.

Day 3 I ate all the same foods and I let Katie have balsamic vinaigrette on her salad at lunch.

Katie’s weight went down just slightly.  I lost a pound, so I’m sure it was the almonds.  I’ve never felt that ill again throughout The Plan and I haven’t had any nuts.

The terrible thing is, since my first elimination diet in 2013, I have eaten almonds and almond butter almost every day.  I have almond butter in my smoothies and almonds in protein bars or trail mix.  I even chose candy with almonds over peanuts because I figured out peanuts bother me during that elimination diet.  I did read on Mind Body Green’s site that if you eat too many almonds, you can build up an intolerance.

Day 4    I’m so excited because Katie usually gets up and has to use a million tissues and has gunk in her throat.  Today, I noticed she hasn’t used tissues in a few days.  She is still using her inhaler once or twice a day.

Katie’s weight went down slightly and I lost half a pound.

Day 5  I gave Katie goat cheese last night and her weight went down, but she has a lot of gunk in her throat.  I also noticed that she has eczema on her face.  I’m wondering if it is from the vinaigrette.

I lost half a pound but I’ve realized that pumpkin seeds bother my stomach.  I have a lot of bloating.  Maybe seeds are not my friends for now.  I may be able to add them at a later date.

Day 6 We ate scrambled eggs for breakfast with a teeny bit of butter.  The rest of the day we didn’t have anything different except for a little sugar.

I went up half a pound and Katie went down slightly again.  It looks like I am reactive to eggs.  I will test those again later since I didn’t have a huge reaction and didn’t feel bad.  This is the kind of food that I can have sometimes, but I will need to eat non-reactive foods the next day.

Day 7 We were going to have a rest day, but we went out shopping with my older kids and Katie was starving.  We went to Smoothie King and got a vegan dark chocolate and banana smoothie.  It tasted terrible, but we each drank a little of it.  We had roasted okra with our dinner.  After dinner, I got bloated and stayed that way all night.  I’m not sure if it’s the okra or bananas.

My weight stayed the same and so did Katie’s.

Day 8 I ate corn chips because I was so hungry!  I also added shitake mushrooms and zuchini.  I shouldn’t have added all of those foods, but I was feeling over the meal plan.  That night I was bloated and my weight was up slightly.  Katie’s weight went down slightly.  I felt like I didn’t do well with the mushrooms.  I’m sure this is too much information, but my pee smelled like mushrooms, kind of like when you eat asparagus.

Day 9 Yesterday we ate Chick Fil A.  This is the only fast food place I will eat.  I get the Grilled Market Salad with no blue cheese. The funny thing is, it comes with a nut mix to put on top.  I usually get a small order of fries, because they are gluten free, so I often had a little stomach discomfort.  I thought it was the fries, but now I know it was the almonds in the nut mix.  I’ve eaten there again without eating the nuts and have had no problems.  I know the fries aren’t good for me either, but I only eat them every once in a while and then eat healthy again.  Katie gets the nuggets and fries.  I was worried about this addition, but she barely went up in weight.   She had a piece of toast for breakfast too, so I think she is okay with gluten.

My weight went down half a pound.

I figured out that the vinaigrette dressing I was giving her had mustard seed.  According to Recitas, that is one of the most reactive foods for her patients.  We tried a different dressing and Katie has done fine.

Day 10 Today I introduced dairy.  I had a grilled cheese sandwich for lunch.  Cheese is supposed to be less reactive than other kinds of dairy.  I allowed Katie to have a Chick Fil A ice cream cone to try dairy again.

My weight didn’t change and Katie’s weight went up half a pound.

Day 11 I had a salad from Panera, but they forgot my dressing.  I had to make my own with apple cider vinegar.  I had bloating and a runny nose.

I lost half a pound and Katie’s weight went down a few ounces.

Day 12 Today I ate terrible (sugar, chips, gluten free cookies), but my weight still went down half a pound because I wasn’t eating reactive foods.  Katie tried cheese again and her weight was up about half a pound.  She had a lot of congestion, but we were around a dog yesterday and she is allergic.

Day 13  We went to a wedding shower.  I ate lots of things that hadn’t been added yet and I drank wine.  My weight only went up about a pound and a half, which I totally expected.  I let Katie get off of the diet now because she hasn”t been reactive to much besides the dairy, just as I expected.  I’ll let her have it occasionally, but no more once a day servings.

Day 14 Today I ate a salad out at a restaurant.  It was a cobb salad, but I avoided the eggs.  I wanted something quick for dinner, so I ate grits.  I immediately felt congested with a runny nose.  I think corn is a reactive food for me.

My weight went up slightly, but the congestion was a real sign.  I’ve been struggling with congestion and sinus problems for years.  The last time I did an elimination diet, I didn’t notice any issues with corn.  That’s the great thing about this diet plan, really.  You learn to pay attention to the signs your body is giving you about certain foods, and it’s confirmed with the slight weight gain.  The only time I really paid attention to the temperature is if our weight went up only slightly.  If there was also a temperature increase, then I knew it was most likely from inflammation.

The first week of this diet, especially the first 3 days were torturous.  Would I do it again?  Yes, because the information is invaluable.  I could have gone somewhere and paid several hundred dollars for food sensitivity testing, but the tests aren’t always accurate, and I wouldn’t have learned how to listen to my body as well.  I may not have believed how bad almonds were if I hadn’t felt the miserable flu-like symptoms.  I will probably test corn again and also eggs and okra.  I also haven’t tested fish or shrimp yet.

If you are interested in trying an elimination diet, contact me and I can support you and help you make it easier.  I also love to hear food sensitivity stories, so share in the comments below.