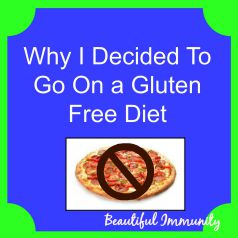 Listen, I’m a girl who loves her bread!  My diet used to consist of bagels in the morning for breakfast, sandwiches for lunch and pizza or pasta for dinner.

To understand why I wanted to cut gluten out of my diet, you have to go back to 16 years ago.  My mother was diagnosed with a rare autoimmune disease, called eosinphilic fasciitis.  It caused swelling and tightness all over her body.  She was put on many medications to relieve symptoms.  She also went into the hospital to be treated with a horse serum that would build her immunity to this disease.  After nine years on steroids, she was diagnosed with melanoma, but not on her skin, inside her colon.  She was given an estimate of about 2 months to live.  However, she lived about 21/2 years after that diagnosis.  I watched her go through horrible treatments with chemotherapy and other symptoms that I can’t even bear to think about.

My maternal grandmother also died at a fairly early age.  She was in her early 60’s.  My mother believed that she had a similar autoimmune disease, because she complained of trouble swallowing and always had trouble eating.

My last memory of my paternal grandmother was of her making a soup of green vegetables and telling me she just couldn’t eat anything anymore.  She said she was allergic to everything.

We have a lot of autoimmune disease in our family!

After my mom became ill, I started wondering if there was some way to cure all of these problems with food.  Elizabeth Hasselbeck came out with information about Celiac Disease and I wondered at that time if that was something my mom and I might have.  However, most of the information out there stated that symptoms are diarrhea and weight loss.

I was not overweight, but I definitely didn’t have an issue with weight loss. So several years went by and I still had symptoms and my mom got sicker from the drugs and chemo she had to take to help with her illness.

A year or two after my mom’s death, I went to my allergist and asked to be tested for wheat and milk allergies.  My tests came back negative.  But still, I had worsening symptoms of horrible belly distention when I would get bloated, gas pains so uncomfortable that I often had to come home and lay down because it was uncomfortable to walk.

My next step was to go to a gastroenterologist to be tested for Celiac Disease.  My test came back negative for Celiac.  I decided to go off of wheat anyways because I just wanted to see if it would help.  Within days my symptoms eased.  Since that day, I have not had the horrible bloating and distention.  I have not had the debilitating gas pains.  I don’t even crave wheat anymore because I feel so much better.  I know the consequences and I don’t want to ever go back there.

Since that time, I’ve done lots of research and found that gluten sensitivity can cause a multitude of health problems.  I you or any of your loved ones suffer from illness or disease, I urge you to do your own research and consider eliminating gluten for a few weeks to see how your body responds.

Here are a few great resources: